A Swedish soldier has been convicted of negligence and fined 21,000 kronor – about $250 US Dollars – for leaving a USB memory stick with military secrets in a public computer. The Stockholm court says the memory stick contained classified information about improvised explosive devices in Afghanistan.Â  The Sony Memory Stick was found by an university student in Stockholm and luckily for us, handed over to authorities. Are you kidding me?Â  Only $250 dollar fine for misplacing such valuable information.Â  The only conclusion I can draw is the bomb schematics probably didn’t really work.Â  After all, when was the last time we heard of a Swedish bomb going off? The Swedish soldier admits accidentally leaving the memory stick in the computer, but claims he wasn’t aware the information was classified.

Wednesday’s ruling says he acquired the information while serving as a peacekeeper in Afghanistan in 2006 and was supposed to have handed it in when his mission ended. Source:Â  Independent UK. Continue Reading 1 Comment

DRAMeXchange published a market research paper stating that NAND flash memory will continue to flood the market at lower prices. NAND flash memory is primarily used for storing songs, photos and other data on gadget type devices like digital cameras, MP3 players and iPods. The biggest contributing factor on why the market will continue to see cheap NAND is lack of sales.

Since production forecasts run months ahead, the market has sitting inventory. To move this inventory prices are continueing to drop. For example, DRAMeXchange reported a drop of 20% in June for NAND memory related devices.

The NAND flash market has been so bad that the creator of the chips, SanDisk, on Monday reported a surprise loss of US$68 million for the second quarter. The company blamed the supply glut for its problems, pointing out that it sold a record amount of flash, 120 percent more than the same time last year, but that prices are down 55 percent compared to then.

SanDisk also reported the flash memory pricing might get worse [better for us] in the third quarter. So, it might be a good idea to start picking out your Christmas items now and make sure it’s some type of flash gadget. On the flip side, with today’s surplus means these companies are cutting back production as well, so once this flood dries up, we could see a shortage for NAND and prices jumping up…and the cycle goes on. Source: Network World. Continue Reading 6 Comments

SanDisk is going faster than fast with their new Memory Stick PRO-HG Duo product.Â  This new Memory Stick line from SanDisk is the fastest format of it’s kind.Â  So what kind of speed are we talking about?Â  How about 30MBs per second.Â  Yep, MBs not Mbts per second.Â  The sustained transfer speed for both reading and writing is static at 30MBs and it’ll be interesting to see if the spec is the same as the street [experience]. 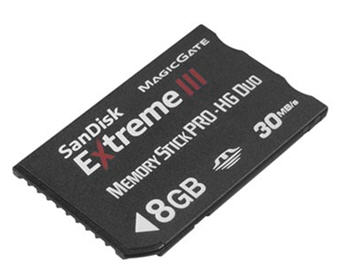 To put this figure in perspective, the non-HG Extreme III Memory Stick from SanDisk is only able to achieve an 18MBps transfer speed. This new memory card represents an increase of over 50%.

If you want to put that into perspective, check out a dated benchmark from a couple years ago.Â  Boy how times have changed. The SanDisk Sony Memory Stick PRO-HG Duo is expected to become available late next month with 4GB and 8GB sizes at prices between $90 and $150 respectively. Source:Â  MobileMag.com. Continue Reading 3 Comments